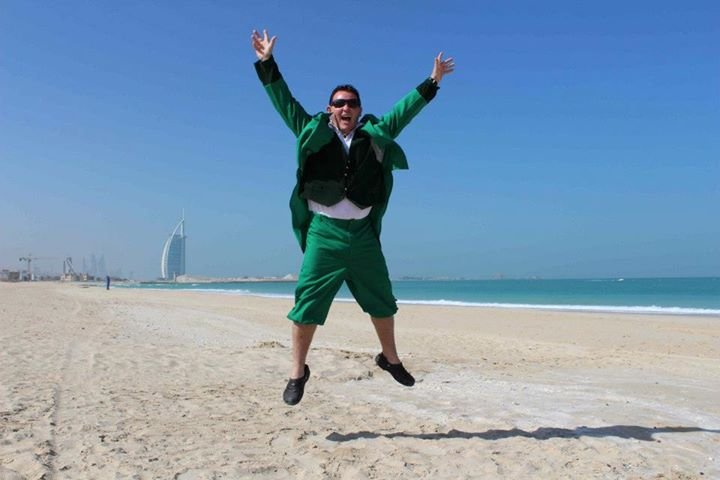 We are delighted to announce that Paddyman Irish Entertainment, the number 1 Irish entertainer across the Middle East has joined Dubai Party Bands for bookings.

A full time Irish entertainer based in Dubai, UAE. Paddyman performs a mix of high energy music with a variety of instruments with some comedy jokes, stories and funny songs. He has shared the same stage as other notable Irish acts such as The Saw Doctors, Sharon Corr and Sharron Shannon.

The name PADDYMAN came about as a result of wanting to perform some funny songs as part of his act. He wanted to visually differentiate this from the singalong Irish & high energy dance songs he performs. Paddyman was also conscious of ways he could reduce the risk of possibly unintentionally offending people in the audience in Dubai and UAE in particular with some of the songs. Therefore, he started wearing a leprechaun hat & beard for these parts of the act. This immediately became very popular as people could clearly see that he was about to perform some funny material and they listened! The comedy jokes and parodies that he has performed have since become his trademark and Paddyman Irish Entertainment continues to grow that part of the show.

He performs weekly at the largest bar in the Middle East, Barasti Beach Bar, the #1 Real Irish Bar, Fibber Magees, and #1 Irish Bar in Abu Dhabi, PJ O’Reilly’s. Besides these he regularly performs for weddings, corporate events, private parties, festivals & in Irish bars all over the world, (From Hong Kong & Bahrain to Ireland & Canada)

We welcome all queries.